Any oversight is a risk: Attila’s story

In August Attila surprised us with a thank you messagge on our Facebook page. We asked him to tell us the story of his accident and how Panda Safety’s shoes protected him.

Panda Safety contacted me and asked me to write a story about my accident which I’ve had back in September 2015. Needless to say that I was happy to get an opportunity to share my experience. Who knows, maybe it will save somebody else’s life or limb. So here is a story about human stupidity (which was my own so I feel free to name it as it is) and a good pair of work boots. 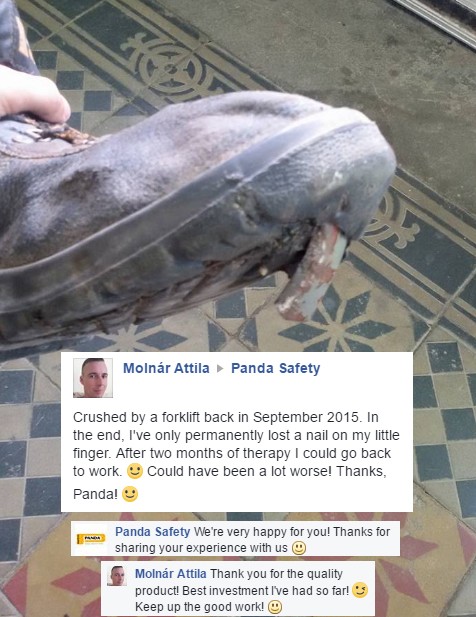 Back in September I started working for a company that operates many cold storage facilities here in Serbia. I was hired as a maintenance electrician. Prior to that I worked as a maintenance technician at another company and my job included running maintenance and service on construction machinery, mainly scissor lifts and other aerial work platforms. This bit you need to know so that you may understand how I got to service the cold storage facility’s forklift in the first place.

Basically, it was my second day at work and one of the supervisors walked up to me and asked me to have a look at an electric forklift which was malfunctioning. Since he knew my background he thought that I’ll be able to fix the problem in no time. I went to the forklift. It was a silly contraption on which the forks were located on the right-hand side of the driver and you had to climb into your seat from the back side of the forklift. I still think it’s not the most cleverly designed piece of machinery out there… Anyway, after a minute or so I came to the conclusion that the batteries were dry and that’s the reason why all power shuts down the moment you give the command to move. So I topped up the batteries with distilled water and plugged in the charger.

Just thirty minutes before the end of my shift, I came back to the forklift with one of my colleagues to check and make sure that everything’s functioning now that the batteries have been somewhat recharged. He did mention that a bunch of dead-man switches were deactivated on the forklift (here in the Balkans, it is common belief that safety measures are for sissies and that they are implemented just so to make the driver’s life more complicated… So, “naturally” it is up to the driver to “fix the mistake” of the silly engineer that designed the machine). I have let the overzealousness which accompanies everyone who starts a new job, to cloud my judgment! I did a few very dumb things which ultimately enabled me to raise human stupidity to a whole new level! First: I totally disregarded my colleague’s warning about the deactivated dead-man switches. Second: I didn’t want to sit in the forklift because “all I wanted to do was make a quick check”. Third: despite the fact that I never saw that particular forklift in action, I thought that it works the same way my electrical scissor lifts used to. Namely: if you push the lever slightly forward, the machine will move forward at a slow pace… Oh boy! Was I wrong… Later I found out that there’s a separate button which you need to push in order to switch between forward- and reverse gear and that the lever will make the machine move in that set direction no matter which way you push it. So my fourth mistake was not calling the designated forklift driver to assist me (“driving a forklift is not rocket science!”, right?). So there I was: standing behind the forklift and giving a slight push on the lever, thinking that it will slowly move forward and that nothing will happen to me… The moment I’ve pushed the lever, the devil’s contraption jumped right backwards at me, pushed me over and the sharp pain felt in surprise made me scream… The next moment I was on the ground with my right foot trapped beneath the forklift’s hind wheel. Thank God I am not of the panicking sort so I’ve managed to quickly assess my situation. I felt that I could move my fingers, though with a certain amount of pain. The fact that my foot wasn’t crushed to a pancake gave me instant relief… I looked at my colleague who was just standing there all panic-stricken and told him with the most calm voice that I could to go get the supervisor and also fetch another forklift. The poor guy almost fainted. Soon I found myself surrounded with colleagues who all needed calming down and assurance that I was fine. Today I find this situation quite funny! Then came the supervisor with the other forklift, he pushed the forks under the hull and raised the forklift from my foot. Two colleagues quickly pulled me out and we all thought that it was going to be the last scary scene for the day… We were proved wrong the very next moment when one of my colleagues looked at my work boot and saw that the steel cap was protruding from the sole! The poor guy almost fainted… They quickly threw me into a van and we drove off to the nearest hospital which was some 25 km away. During the ride I didn’t feel as much pain. Probably because the adrenaline has set in…  I wanted to know just how bad the situation is, so despite being told not to touch anything I started taking my boot off. That protruding steel cap wasn’t a pretty sight, I’ll tell you that! I honestly thought that it had severed my foot in half. Surprisingly though, I felt that the boot was coming off quite easily… Finally it came off. I looked at my sock and saw very little blood! “What kind of witchcraft is this?!” – I thought. So off came the sock as well and now I could finally see the full extent of the damage. My toe was pressed so hard that blood was coming from beneath the nail. The next three fingers were also pressed, but not as hard as my toe. The little finger took all the punishment since it was closest to the forklift’s wheel. It was squashed as a bug and almost torn off of my foot! Blood started hemorrhaging  only after we’d reached the hospital and the adrenaline effect started to wear off. I started to shake and could finally understand what happened and just how lucky I was! If I hadn’t bought myself that pair of work boots, now I’d be a cripple with a mangled foot!

I went to surgery, but the surgeon (after examining  my foot and the x-ray) said that there’s not much he can actually do for me. He can’t stitch up my little finger, only clean it, push the flesh together and hope for the best. If after a couple of days it starts to rot, he will have to amputate it…

Luckily, it didn’t come to that. I’ve managed to come out of this accident with two months’ worth of therapy and a nasty looking little finger (on the bright side: now I have one less nail to cut. And less having to bend over is always a plus in my book).

In conclusion, I would like to say two things. One: don’t cut corners when it comes to safety procedures – they were established for a reason! And two: get yourself a good pair of work boots! I bought my Panda Basic Alfa 6911 S1 SRC some 2-3 years before the accident and I remember them being dirt cheap at the time. I didn’t really take care of them either, meaning that I wore them in all sorts of environments ranging from factory halls to rock quarries. They were covered in clay and mud and drenched in oil more times than I can remember… And still: at that moment they’ve performed their job superbly! Of course I can’t wear them anymore, but don’t think that I threw them out. Oh, no! I keep them in my shed as a memento of how stupid and tremendously lucky I was.

I would also like to take the opportunity to once again thank the people at Panda Safety for making such a great product! Keep up the good work!

Thanks to its very high-quality standards, PANDA S

Your ideal workmate will be taking a short break f

Kit, a British ranger, talks about her experience

Here is the new PANDA SAFETY display that will be

If the joints and muscles of the legs are subjecte

The BASIC SOCKS are a complementary product capabl

PANDA SAFETY is the perfect partner for taking big

Attention to detail, commitment, and craftmanship

Our WONG model from the AFTER WORK line features a

With our SUPER-PANDA by your side, even tackling t

The structure of the AFTER WORK line of products p

There is no detail that is overlooked, that is not

A peculiarity of the PORTOFINO model of the AFTER

A new range of products developed to offer users o